Why Do Poultry Workers Have Scars on Their Wrists? 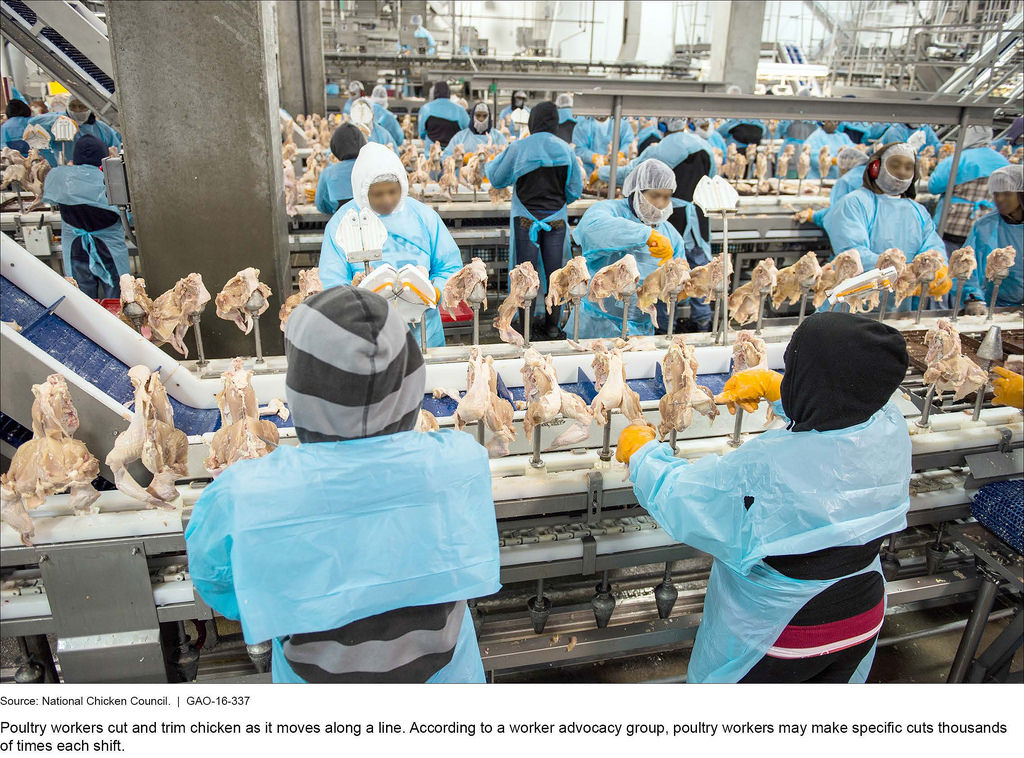 When I was a young lawyer working in a labor side law firm in Philadelphia, I drove 150 miles to Selinsgrove, Pennsylvania, where Monkee's singer Davey Jones had a home nearby, to meet with union officials and poultry workers. Many, if not most, of the attendees had wrist scars from surgery to correct carpal tunnel syndrome, a painful condition linked to repetitive motion.  "What's going on?" I asked.  They explained that because line speeds at the poultry plant were too fast, workers developed repetitive motion injuries. The plant referred them to a local physician who performed carpal tunnel surgery and sent them right back to the line. I didn't say anything, but I got a freakish, Frankenstein vibe from the sight of so many people with scars on their wrists.
I thought of that long-ago meeting when I researched the Trump Administration's record on worker safety in the food industry.
According to OSHA, poultry workers are almost twice as likely to suffer from serious injuries as other workers in private industry and six times as likely to have a work-related illness. Despite a tendency in the industry to under-report injuries, the rate of carpal tunnel syndrome for poultry workers is more than seven times the national average, according to a 2013 study. In 2014, the National Institute for Occupational Safety and Health (NIOSH) performed a health hazard evaluation at a poultry processing plant in Maryland. The analysis demonstrated that 81 percent of the jobs evaluated involved "levels of hand repetition and force over the American Conference of Governmental Industrial Hygienists' (ACGIH) action limit." NIOSH researchers found that 76 percent of the tested employees had abnormal results from a nerve conduction test and 34 percent had evidence of carpal tunnel syndrome.
Two weeks ago, the United States Department of Agriculture announced that it would issue waivers allowing poultry slaughter houses to increase line speeds from a presently dangerous 140 birds per minute to 175. Ignoring the warnings of whistleblowers who have been describing unsafe conditions in poultry plants for years, the Trump Administration's decision to issue waivers is a response to a petition filed by the National Chicken Council, a lobbying group, to have the USDA waive line speed limits altogether.
The Trump Administration's action is not only going to cause poultry workers to suffer disabling injuries, it will increase the incidence of food borne illnesses among consumers. In pilot plants permitted to test for increased line speeds, inspectors reported they could not adequately inspect poultry carcasses for signs of illness and fecal contamination.
Perhaps not surprisingly, in 2016 the poultry and egg industry contributed over $19 million to political campaigns, more than triple the previous record, 93 percent of which went to Republicans.
Donald Trump, working class hero.
Be the first to comment!
Post a Comment